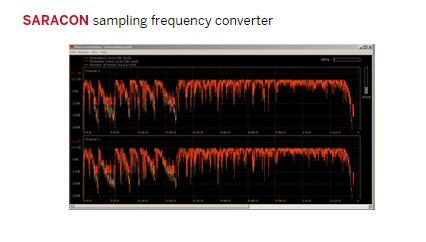 SRC using Analog loop back, a How to and description of my setup/workflow

I talk about Sample Rate Conversion in 6 months into the 96k adventure.  Its a few blog entries down if you want to get caught up.

Well here is how I do it and some keys factors to note.

Sample Rate Convert by playback of a high resolution file and record or capture back at 44.1:

You also need 2 different audio software's to play and capture since they will be at different SR too.

Sequoia allows you to open 2 instances at the same time, one records from one setup of hardware, 1 feeds the the other for playback.

So I open up the Sequoia setup I named Playback, its using the Mytek 192DSD  D/A USB interface.  Its running at 96K and will play back my 96k stereo file. The Mytek is good for this setup since my RMEs are using 1 set of Digital inputs, and it also have a USB interface.  So I simply hit a button on the front to change from my normal recording everyday operation with my RMEs feeding it to USB input, so my Playback Sequoia can feed it.

I then open my main version of Sequoia which is always set to use the RME HDSP9652 +9632 interface. My Apogee is hooked to my RMEs. The setup is clocked from my A/D (Apogee AD16) and I switch it to record from my normal 96k to 44.1k. I open a session and arm a track to record stereo the input on my Apogee AD16 that is hooked to one of the 2 outputs on the Mytek 192DSD  D/A.

Playing back the Sequoia Playback instance, the file leaves the computer via the Mytek 192DSD  D/A and is captured back into the main Sequoia via the Apogee AD16. The recorded file is 44.1.

You can certainly add any hardware processing between the D/A and A/D, just make sure you address monitoring. In my setup I am listing to the Mytek which would be prior to any analog processing.
Posted by Tim Dolbear at 10:24 AM No comments:

Californication... I could have been a Moody.

So we just watch through all of Californication on Netflex to relive it before seeing the last season. The first 3 seasons are great, written very well, dark and funny, but after that it kind of looses its way, and especially the last season (7), it was written so poorly, like a cheesy sitcom.  I did loved the last episode though.

Upon watching the first show, I was heartbroken for leaving California. I really do miss SoCal.  Every street they shot the show on, I have been on, every place and scene was my old place and scene... I am not moving back, ya kidding? A smaller house for 750K on a lot they list in square feet and not aches? its not for me any more... I love the vibe of So Cal, and I really relate too much to the show.  I am not and have not been a druggy or drinker... but my vise was elsewhere... I can't help but think I could have been Moody, or at least very much like him. My life could have been totally different, but God had different plans for me.

If I had not surrendered to the plan Jesus had for my life, everything would have been centered around self destructive activities in an never ending search for happiness between the legs of another. Harsh, but true.  Life still has its firestorms, but as the storms circle around me I have comfort from it and a peace that only comes from knowing Him.

Sometime we are given a glimpse of what could have been, those are the times to realize just how much Jesus cares for each one of us.  I see where my life was, the road I had hoped to go down, and reality of the pain if would have brought.  My life now is good, very good, I must always remember that. People talk much about Jesus being our Savior, and how He gives us eternal life, but today think about how he is your Savior for your current everyday life.

6421
A new reality show following Music Producer Tim Dolbear as he works with groups and artist in the studio.

Well, we got some good responses from the first web-episode of 6421. But as far as developing it into a reality show… production companies just wanted to script it all out. So we back burnered the project.  We will move this 1 episode into a promo about working with me and the studio.  So not a complete waste.

New Gear Added this year!
The stunning Great River MP-2NV 2 channel preamp has made a home here. Absolutely love it. If you watched the Dave Grohl Documentary on Sound City (where I worked for a while at Kieth Olsen’s Good Night LA Studios) all about the studios’ NEVE console, this preamp nails the sound of that board.  You can push the input into the red and add a wonderful sweet harmonic rich tone to the sound, amazing!  More about it soon.

I also added another 1981 Ashly SC-50 Compressor, Blackface.  It will be permanently married to the MP-2NV.

I also added the sE5 Stereo pair of mics this year.  Just a great set of room and overhead mics.  I did a review in Mix on them if you want to know more about them…http://www.timdolbear.com/mix.htm

We started testing Sequoia 13 here months ago and it was released last week. all going good with it and we are digging the new workflows features. 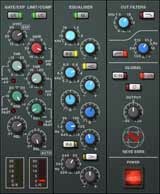