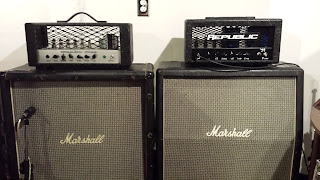 Its all the same, right? Let's compare raw tracks recorded from different studios.

Studios and their engineers really can make the difference. 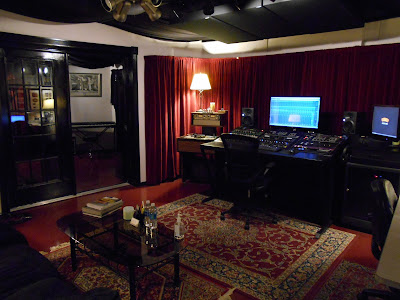 I had a client a month back ask me "So if I just have my guy track their parts at any studio, it really doesn't matter, right? I don't need to bring him in here to your studio..."  I answered as straight forward as possible, but decided to post a few examples and let our ears do the judging.

Over the last month, I had a client track a cello at another great studio here in Austin (Version B), and at the same time I tracked a cello here at Eclectica Studios (Version A). Of course this example is 2 different players and instruments, but I ask you to simply listen to the over all sound, the depth, room...

The vocal example is slightly more scientific. This example uses the same singer, tracked here at Eclectica Studios (Version A), and then tracked at one of the top studios in Texas the following day (Version B).

In all cases, the best mics were used, no one knew this comparison was going to be done and therefore we all simply did what we do as engineers. Its amazing how different is all sounds.

StudioTrackingComparisonFiles.zip
Posted by Tim Dolbear at 1:14 PM No comments: 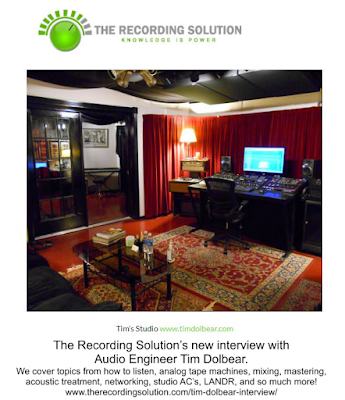 The Recording Solution just interviewed me for their Youtube show. We talked about all sorts of stuff, Recording, Mixing, Mastering, analog gear and tape, room acoustics and on and on!  Enjoy!

Below is the Youtube video, watch it here or open it on Youtube.com

Posted by Tim Dolbear at 7:30 AM No comments:

Mixing to tape vs not... A listening test. 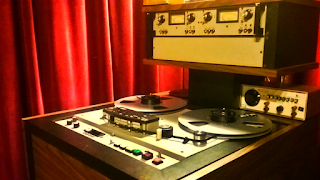 I promised some test files of mixing to tape.

Here is a song, NOT MIXED, just a fader up/ruff mix of the session, no plugs other than some verb in the AUX. This is a song I am tracking/producing for Paul Martinez called "The Little Things"

1. No tape = The ruff mix leaves Sequoia, Mytek D/A feeding a Great River EQ-2NV, into our Manley ME VaribleMu the captured back to Sequoia at 96k using an Apogee A/D.

2. Tape Clean =  The ruff mix is leaves Sequoia, Mytek D/A feeding a Great River EQ-2NV, into our Manley ME VaribleMu then to the MCI JH110B and captured back to Sequoia at 96k.  Levels are set very cleanly, Less tape compression and saturation happens as a result.

Info about level:
The Taped Pushed version is louder RMS of course, but no peak overs.  In fact I can feed it a normal level and have the A/D peaking at about -4db, And then bring up the Feed to the tape machine 6 db and the peak after tape never goes above -1db at the A/D, no overs.

RMS comes up, tape compression comes up, the Limiting the tape imposes kicks in and makes it so I bring it up +20db on input and not have overs at the A/D.  Very cool!  So notice the peaks and not just the RMS. But really its about the over all sound. thats it.

All in/out levels on the machine are Calibrated to 0VU/-16DB digital. The input feed to the tape machine is handled by the Mastering edition Manley Vari-Mu that is Stepped in DBs so recall on a mix is possible

Remember the best way to compare these files is to load the 3 wav files in to your DAW on separate tracks and Solo the one you want to hear. Its a good way to go back and forth to compare. In Samplitude/Sequoia you can mute tracks 2 and 3, and while track 1 plays, if you solo either 2 or 3, it switches instantly to the solo'd track. 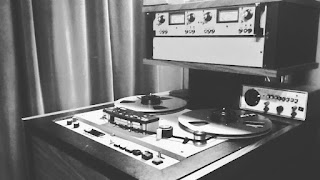 It's Done!   Long road, but it's done and sounds amazing! Mixes sound like a record! I am totally sold on mixing to Analog tape.

Doing the final setup with the MRL was a challenge, not the normal alignment part but I had to setup everything such as erase depth, Rec Lin, Bias Freq... So it was an all day and evening thing... But Its now done and running amazingly.

Thanks for following along. Here is links to all the installments.

Part 1 Rebuild the rack and replace all the IC sockets...

Part 3 Rebuilding all the Molex Connectors.

Part 4 We Got Sound!

Part 4 Smoke in the studio! 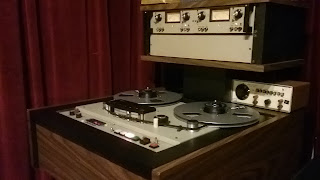 Just finished re-cap'ing the audio penthouse. Audio is much more stable sounding and feeling. Operations are smooth and how they should be.  We just ordered the MRL alignment tape from MARA Machines ( They are the kings of rebuilding MCI machines). Once the tape arrives we will do final alignment and setup and we are done! 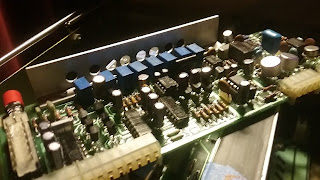 We do have 2 remaining little fixes we need to address that will not stop us from using the machine in the meantime:

First there is still the transport issue that when the small board/joystick for the MVC is connected, the Rewind and FF buttons will not trigger the motors. The lifter will go, lights changed, but no movement. I can RR and FF using the Joystick just fine. When I unplug the MVC, RR and FF work perfectly BUT the digital count then does not work anymore and sits at 0.10... I do not need the MVC, but would like the RTZ and counter to operate.  Anyone have an idea? 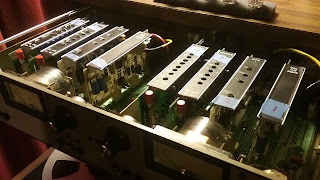 Second, the channel 1 input into the Audio Penthouse, the connector can loose contact even though its screwed into place, something breaks contact when I open and close the drawer... simple fix, just annoying.

But right now we can print to tape and playback and the machine is not even bias/aligned, so good sign!

That's all for now, till next update! 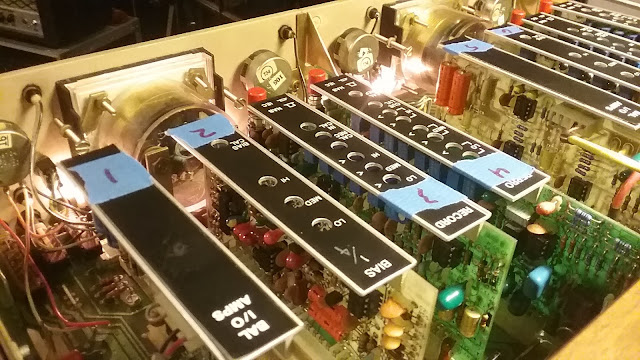 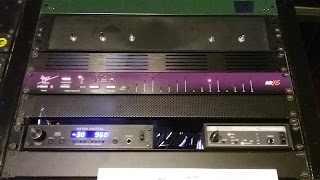 So... first the good. I built the switching system to allow me to route to/thru/from the JH110B tape machine, adding it to the signal path of the Mix Buss.

I decided to do a switching system and not a patchbay as I am not a fan of patchbays or connectors.

See my blog about connectors and patchbays: http://timdolbear.blogspot.com/2015/05/cables-connectors-patch-bays-pedals-and.html 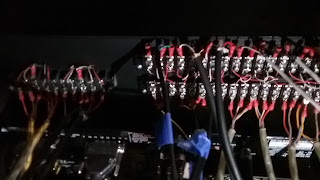 I also decided to do a terminal connection instead of XLR ins/outs. Connectors just have such a small point of contact verses terminals.

I did a test measurement prior to adding the switching system,  I figured the first thing many would think was the same thing I thought about; will it add noise or a loss of sound quality?

Adding the Switcher into the signal path, only added 1 balanced cable to my mix buss signal path when its going straight through, meaning no tape machine in line:  Mytek D/A feeding the GR EQ-2NV (in Bypass for the test) into the Manley Mastering Edition Variable Mu into the switcher, out to the Apogee A/D. Of course it added to it all the wiring for the Switcher box.

Crazy as it seems, My noise floor went down from -82.6 db to -83.7 db and my volume back into the DAW from the mix buss is .2db louder.  I can not explain it as all the cables are the same except for the 1 new 3ft balanced cable added between the Manley and the Switcher.  It may be the difference between the Variable Mu being warmed up for 1 hour verses 4 hours. (first test was at noon, 2nd was at 4pm).  Regardless, sound perfect and did not add any noise issues. 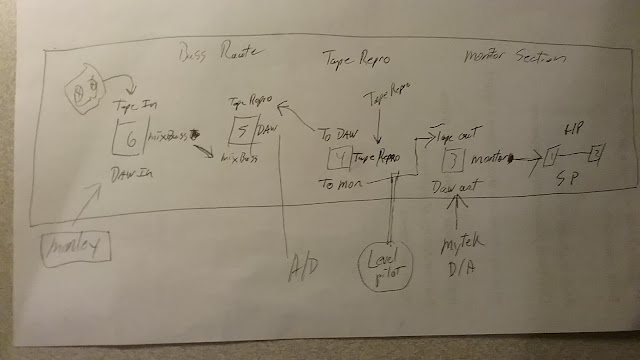 While then testing the route to the tape machine, setting levels, and working with a TC Electronics Volume Pilot that is inline between the tape machine and the monitor send, audio was working nicely on the JH110B, still not bias/aligned, but passing sound both in INPUT and REPRO (while Recording) modes. Suddenly a bad sound came through the right side speakers, and smoke poured out of the Audio Penthouse of the JH110B. I quickly killed power to the JH110B and opened the door for some fresh air...

Another Resister blew, this time one on the 18v input to the I/O card for the right side or Ch2.  I checked the 2 tantalum caps that are inline with it and booth are dead shorted now... good grief!

At this point I will of course replace the resister but also plan to replace all the tantalum caps on the audio boards (repro, rec, bias, I/O).  Fun!  But apparently needed since I have so many bad and going bad daily. 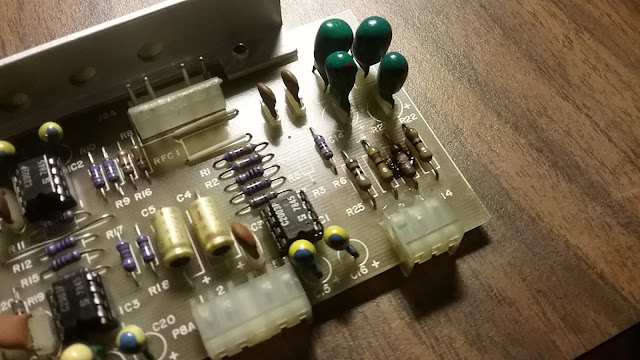 Posted by Tim Dolbear at 3:06 PM No comments: