The Pillow and the Stone - The differences in microphone pre-amps and how to choose one.

For the last 20 years I have run the course of Mic Preamps here at Eclectica Studios. From crappy $50  "tube" preamps and built in mixer preamps to my collection of top-of-the-line Manley and Great River pres. I have learned so much. For me the Microphone Preamp is very important, more so than the mic. A bad preamp can make a $4000 mic sound like a $200 mic and a top of the line Mic Pre can make a $200 mic sound like a $4000 mic... Imagine what the $4000 mic sounds like through that top of the line pre! Mic Preamps can add color and warmth, harmonic richness, or the can add crud and cloudiness.


For fun, here is a run down of pres I have had owned through the years: 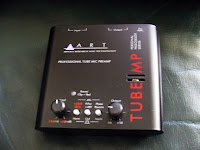 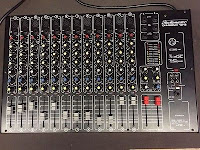 I used my Studio Master Diamond series with my Fostex R8 Reel-Reel, and it sounded great for what I was doing at the time. But needing more inputs and routing capability, I moved up to a Mackie 2404. I had various different "tube" preamps that I had hoped would be an improvement on the built in Mackie Pres; the ART, the Bellari, the Peavey TMP1, but none of them really did anything great. I even swapped out the tubes with various upgrade tubes, even NOS (New Old Stock) RCA 12AX7 from 1963. The Bellari sounds a little nicer, but it was not a game changer.

...I came to realize that you can not get a wonderful tube sound from a unit using a wallwart. The Manley has 300vDC rails powering it. The ART MP1 can run on a 9volt battery...

In 1999 I opened Eclectica Studios and bought 2 Fostex VM200 digital boards. I soon after realized just how bad a mixer could sound and missed my Mackie 2404 big time. I soon bought my first REAL preamp, "real" meaning instead of a 5 cent op-amp chip that's found in mid/cheap lever mixer, the Manley 40db Mic Pre was 1 channel, $2200 retail and was PRO all the way. Its changed everything for me.

I took a tour of the Manley factory with my wife Angela in 2001 and bought the mic pre directly from Eveanna Manley. The entire drive home all I could think of is how I just spent almost $2000 on 1 channel of mic pre, basically 1 knob! We got to the studio and plugged it in and was floored at the difference. Even a SM58 sounded like a high end studio mic! 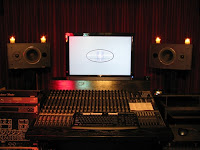 Realizing how amazing the sound of the Manley was, clear, tons of tone and resolution, I knew I needed more than just the 1 channel of hi-end mic pre, so I bought the Altec 1678 (aka the MASH unit, Microphone Amplification System Housing) for about $600, an old auto mixer made for installs that retailed for $3000+ in 1979. A monster unit with amazing transformers and sound. I had it mod'd so the inputs feed the mic preamp into the channel's volume control and then straight out the direct out bypassing all the Auto Mix features. I also had channels 4-8 mod'd to pad the input 3db. The MASH unit is solid state and up until that point in my career I did not know that solid state could sound as good as tube, difference but just as good.

I replaced the Fostex mixers, which were at this point just CUE mixers for head phone feeds and monitoring with a mod'd Mackie 2408. Its preamps were pretty good for a mixer a I used them to track drums since the MASH unit tended to clip the frontend when tracking LOUD drummers. 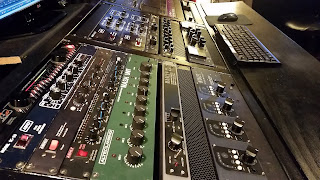 The Mackie left a few years ago when I moved to using totalmix for all cue mixing. At that point I had the Manley 40db, the MASH unit, and the Warm Audio TB12 which is a solid state API style mic pre.( My MIX Magazine review of the TB12)  The Warm Audio was soon replaced with the amazing Great River Neve style 2 channel MP-2NV preamp. We recently added the Manley FORCE, 4 channels of preamps that are designed differently than the 40db preamp but wonderful sounding. There will be a video series about the FORCE coming out soon, Watch my blog for more on that.


The Pillow and the Stone


So why the different preamps? If the Manley 40db sounded so amazing, why not buy 8 of them and you're done?


Picture a stone floor. Beautiful, with colors, grain and veins running through it.

Now picture a Pillow, the nicest pillow you have ever felt or seen. Silky, soft, the perfect size.

If you take a tennis ball and throw it at the stone floor it's going to bounce back to you, quickly and with strength and purpose and note the stone does not move at all. The stone floor is not smooth so there is also various reactions, the ball may vary its course and not bounce back perfectly to you and the harder you throw the ball at it the more the angles come into play, we call this odd order harmonic distortion. You can have a fun time bouncing things off of it, a golf ball, super ball, even dropping a drinking glass on it is fun and yields a interesting shattering.

Now throw the tennis ball at the pillow. No bounce and not really fun. it does kind of react and the pillow really reacts to the ball hitting it, we'll call this reaction even order harmonic distortion. Dropping the glass on it and the glass is preserved perfectly. If I lay my head down on the pillow, it's amazing! ...and I would not want to sleep with my head on the stone floor.

So for somethings, the pillow is the best choice, other times the stone is.  No right or wrong, simply choices since both are equally as good for their specific applications.

I chose the "pillow" and "stone" because  they are relevant to our audio uses. Tubes are the Pillow and solid state is the Stone in the example, My Great River and MASH unit mic pres are both solid state and the sound is more upfront than my Manley Tube Mic Pres. The Great River also sound more aggressive with a great strong mid-range, great for rock drums, bass, electric guitars, vocals... while the Manley is great for those things too but yield a different version, more depth, sweeter and more round, nice lows and sweet highs.

A bluesy electric guitar through the Manley Tube preamp sounds more 3d, warmer and full. The Great River yields a more upfront stronger sound. 2 completely different colors and each has its place.

For this example, and its not a prefect example, no Eq was used but some compression was used during tracking, same setting, 2 different compressor units (Ashley SC50/55). The Kick mic is a transformer-less SM57, Snare is my strange Cad dynamic mic. No overheads, just the 2 channels of kick and snare.

Kick and snare through the Manley Force
www.eclecticarecordings.com/audio/blog102415/Manleydrums.mp3

Its really wonderfully having these 2 very different types of preamp in a recording to add the range of colors. See my blog post on using variations to make your recordings BIG sounding. spice-is-spice-of-life

I hope this helps you understand and think about types of preamps and understand the value of good preamps. My best advice is to rent as many high end preamps as you can and try them out. When you find and buy ones you love, you will keep them forever so they are worth investing in.

Posted by Tim Dolbear at 1:55 PM No comments: