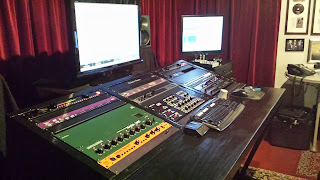 I tested working at 96k sample rate vs 44.1k years ago with Presonus A/D/A. It was the only way I could test it as my A/D/A devices only would work at 44.1k and 48k. I tracked out a song and then mixed and converted it all back to CD quality (44.1k/16bit), and once it was all back at 44.1, they difference between versions was really nothing, really the 44.1 session sounded best than the 96k session. So I had been at 44.1 ever since.

Fast forward to December 2013… I just got a Mytek Stereo192 DSD (Mastering version) and Apogee AD16, getting its WC from the Mytek. With such new toys, I wanted to test the whole 96K Sample rate issue again.

First I tracked a simple rock song in Sequoia; acoustic guitar, clean electric guitar, distorted electric guitar, bass and drums. The drums themselves were programmed using our sample library made from our studio kit…but the cymbals were all played live. All but the bass had a stereo room mics that were tracked as well (meaning we used close mics and a stereo room pair).

I recorded the song 4 times, at 44/48/88 and 96k; 4 sessions, exact same parts played 4 times the same way each time. I wanted this test to inform me, so I spent 2 days make sure it was done perfectly.  I set the sound, hit record, hit stop, closed the session, opened the next session, hit record…4 times through the song in a row for each instrument.

Next I mixed the songs to their actual sample rate and 32bit float. So I had mixes; 96k/32bit float, 88.2k/32bit, 48k/32bit, 44.1k/32bit. The plugs used and mixer setup were copied between sessions to be perfect copies.  I then sample rate converted them inside Sequoia using the highest quality setting, all to standard CD quality: 44.1/16bit (POW-r 1 dithering was used).

96k vs 44.1k, the 96k session in the end at both 44.1/16 and at MP3 had a little more sheen to the sound, but the big difference is the 3D and stereo imaging the 96k sampling rate made. The 44.1 session sounded flat in both image and tone. Not a huge difference, but enough for us here at Eclectica Studios to make the jump. Goodbye 44.1, my old friend, but I just cannot go back to you, knowing what I know.

Also, I know that A/D converters can sound different at different rates, and none of us listening liked the 88.2k as much as the 96K… Seriously, I had hoped to save the small amount of resources gained with 88.2k, but it did not sound as good. Interesting.

Another note;   I used to use the UAD 88rs channel strip for a many years during mixing.  The 88rs does not upsample to increase quality, like the newer UAD EQs do.  I could never get the high end tones I wanted, the “Air”.  So about 3 years ago I switch over to using the Harrison EQ as it would give me the results I wanted and I liked the workflow; knobs only!   I opened up the 88RS channel strip in the 96k session and setting the highs to about 17khz and turned them up!  And WOW!  Amazing.   I copied the setting and pasted it into the 44.1k session and its was gone, a completely different tone came out, not the 17khz I had hoped for.   So now, the 88RS running in a 96k session gains the benefits of the higher sample rate to be able to give me the sound I want.  I am so pleased because this now wonderful sound channel stripe is easy on the resources. Can’t wait to hear how other plugins improve at 96K.


Also I just tested a mix that I did at its recorded rate of 44.1k,  taking the files and upsampling them to 96k then running off the mix at 96k 32bit float to preserve it for sample rate conversion(SRC),  SRC'd it down to 44.1k 32bit float and compared it to the one mixed and run off at 44.1k 32bit float and the one that was are 44.1 though out sounded better by a lot.   So my rule now is, what ever sample rate a session shows up here to be mix at, it stays at that sample rate through out. But as for complete projects I do here from tracking through mix and beyond, I will only do 96k from now on.  There is some nice plugin quality that gets added at 96k so it may sometimes be worth the upsampling.  Case by case...
Posted by Tim Dolbear at 8:25 PM