I am going to go through the steps I use for mixing Drums.  I am going to start with Phase and next time move into making the kick and bass groove and blend and on from there! 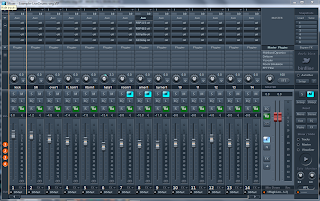 The very first thing to do when you start mixing drums is to not only check the phase but to 'pick' phase. The basics are that the close in microphones, such as the one on the snare drum, when mixed in with the over head mics may have a phase different.  Bring up the overheads first and then the snare channel. Flip the phase on the snare channel and listen. No other tracks should be playing out at this point. Flip the phase back and forth and listen to the tone of the snare.  You will want to also adjust the volume of the snare track to set it to where the most difference is heard.

I mention 'picking' phase. Reason being that sometimes out of phase may actually be the sound you want. So there is no right or wrong, just go for what sounds right. Now, mute the snare and bring up the first tom track and go through the process again to dial in the tom sound.  This process is much easier if you select a ranger over a tom fill and set playback to loop.  Once you have done this for all the tom tracks, bring up all the tracks for the kit and set the levels to a basic mix.

When listening to the entire kit, make sure you listen to how the tracks interact with each other. Example the snare maybe leaking into the tom mics and blurring the sound.  Instead of messing with the phase further, simply gate out the tom tracks, or as we do now in the DAW world, cut out the tom fills as in this picture: 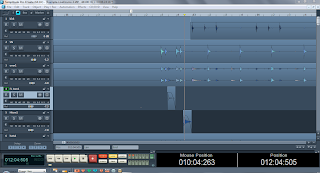 This works great for rock, pop, and metal, country too, but for very delicate music, such as a light drums on a folk song, you can take it a step further.  A song with simple snare/kick/overheads, can benefit from the 2 overheads being addressed separately. In this case I simple add a free and awesome VST plugin call stereo tools  ( http://www.kellyindustries.com/stereo_tools.html ) that allows you to flip the phase separately for the left and right channels.  Then while dialing in the snare, I flip the phase on the L/R overhead mics instead of the snare tracks. Also on the this kind of mix, the kick track should be check too, by flipping it's phase.

There used to be a lot of talk about sliding the tracks around to visually align the phase and timing of all the tracks to the Snare or Kick.  Basically since all the mics have the snare hits bleeding into them,  you slide forward the toms and overheads so that they are matched with the snare track visually.  They are all slightly behind of course due to time delay of the sound traveling to the mics.  I personally do not subscribe to this, but feel free to experiment.