Cables, connectors, patch-bays, pedals, and the disappearance of tone.

A few "a-ha!" moments that shaped how I handle my signal flow.

In the late 1980's while playing in many different rock bands, I built a huge guitar rig; 2 Seymour Duncan 100 watt tube heads that powered 2 Marshall fullstacks, 2 Midiverb II, 1 Midiverb 3, a Digitech ISP33 harmonizer, BBE, a Rane sub mixer and all controlled with a midi switching system. It was held in a 24 space shockmount rack the size of a refrigerator... and weight in at about 250lb. As I slowly built it up over the years, with every new addition to make it better I had not realized that my tone was getting squeezed out ...

I went to a rehearsal with a new band and was so bummed that my tone seemed to just have disappeared. At the 2nd rehearsal I simply place one of my Seymour Duncan heads in a small rack, and plugged my guitar straight into the head, and the head straight into a Marshall cabinet and nothing in the FX loop. It sounded Amazing! My tone was back!

In 2000, I played electric guitar in a band and was using just a combo amp. One time I took a 12ft Monster cable to a show instead of my normal Belden 30ft guitar cable since this was in a small stage setup and I would be a few feet from my amp.

All seemed well till I got to the solo of the first song and all of gain was gone! It felt and sounded like all the mid had disappeared and my gain knob had been turned down... I figured something on the amp had died or was dying. When I got home I plugged it in and had the same issue, so I unplugged the 12ft Monster cable and plugged in my normal 30ft cable and all my mid was back and the gain felt and sounded as it should. What did I learned?  Different lengths cause different resistances, leading to different frequency response and output levels.

(Edit) The lack of highs and lows on the Belden cable gave it a mid heavy response, the Monster had the opposite, more highs and lows, so my amp being dialed in for the mid heavy Belden sounded weak without the mid-heavy sounding input.

Of course there is lots of talk about pedals nowadays since huge collections of pedals are now placed inline before the amps of some players. Some pedals use it's circuit while bypassed, meaning the signal is still going through the pedal's electronics even when bypassed, which of course changes the way the amp and guitar react to each other. A cable straight to an amp's input, allows the guitar/amp relationship to work smoothly, but adding a pedal cuts that relationship and the guitar's pickups are now reaction and relating to the buffer/circuit/pedal.

So in comes the "true-bypass" pedals solution. A pedal that when bypassed simply sends the input signal straight out the output to the amp or next pedal(s). The only thing that is now being added to the signal chain or path is the connectors, small internal wires of the pedals bypass circuit and a switch. Of course an extra guitar cable is also inline; guitar to pedal, pedal to amp. That's still a lot added to the signal.

In about 2005 at Eclectica Studios the last of the 3 "A-Ha!" moment happened. I have always used a patchbay for patching preamps to compressors and EQs and to the AD converters. It made it so I can patch and make multiple combinations.

I decided to connect my Manley Preamp directly to the Ashly Compressor without the patchbay just to see if there was a difference. There was a definite improvement to the sound, better resolution and all-around tone. The Patchbay and extra cable patching had been steeling tone all these years.

Now the patchbays are long gone and all my frontend pieces are directly connected. The patchbay, the extra patching cables, all playing a part in the degrading the sound. There are many considerations of course; connectors dying, oxygenation, type of connectors, +4 or -10 operation, type of cables, low-z or high-z impedance... you get the picture. Eliminating extra links improves the signal's integrity. And remember to clean your connectors often, they can become oxidized quickly and a weak electrical connection can creep in.

So, how about an audio example I hear you ask...

The signal coming out of a guitar is such a low voltage, its easily affected by various elements injected into the equation. Thus... the easiest to show in my example. But please test these theories on your own systems and studio setups. Bypass anything and everything that can be taken out of your signal chain; pedals, patchbays, extra cables, swap out longer cables with shorter ones...and replace any cheap or "so-so" cables with good quality ones.

Our test setup;
Les Paul (Gibson 57 pickups), into a Republic Amp (My Custom 50watt) into a 1976 Marshall 4x12 with the original Greenback Celestion 25watt speakers.

Room mics are a stereo pair of sE5 mics into my old 8ch Altec mic pre into a Ashly CL-50 compressor, into the Apogee AD-16 A/D converter. 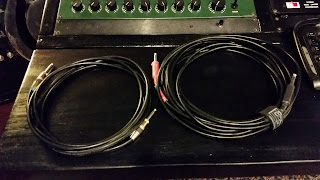 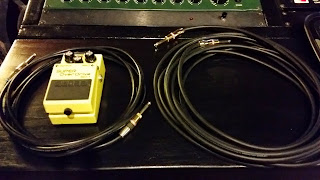 DOWNLOAD all 4 so you can listen on good speakers...


As well as the sound changing when swapping the cables out, the feel when playing changed. The touch of the guitar and how the amp reacted to my playing changed even more drastically.

I hope you found this interesting, I live by this stuff!  What you should take away from this... Its a signal chain and every single link makes a difference. Every element, especially anything that happens before a Preamp or Guitar amp... meaning anything before the signal is changed from mic or instrument level into line level is the most susceptible to degradation. But line level signal changes and morphs too. So run some listening test, and let your ears guide you.

Posted by Unknown at 8:41 AM No comments: